A videography project in Malta

Although we specialize in wedding filming, we do have sometimes the opportunity to make travel films as well. This is how me and my colleague ended up creating a short film about Malta, a small and sunny nation in the Mediterranean that is rich in picturesque views and historic sites. Besides our travel clip, we also had the chance to film a save the date video for a Maltese couple we befriended, just click on the link to read the story. For the technical part, we used 4K equipment that was travel appropriate: DSLR cameras, steadycam, monopied and drones. The journey to the destination was also exciting, as we had a layover in Barcelona, where we took some nice shots as well. Fortunately, we met in Malta the founders of PR Holidays, two young entrepreneurs who offer both accommodation services and mini-tours of the surroundings. With their help we managed to get to know the less touristic areas and enjoy a local’s experience.

The main island and Valletta

Valletta was designated the European Capital of Culture in 2018, and a stroll along its winding alleys most definitely supports the choice. The city is a bridge between East and West, and is charming through its contrasts. Malta has a high living standard, with splendid buildings that reflect British, Sicilian, Turkish and Arab rule. This cultural mix is exactly what makes the country unique: it is a European destination with oriental influences that can be seen in the vibrant colors and exotic flavors. On the main island, besides Valletta, an important attraction is Mdina, the old capital of the region which looks unchanged for centuries. Because history and traditions are important to the nation, every day at noon there is saluting cannon fire from Valletta’s citadel. Outside the city, we enjoyed immensely filming around Blue Grotto, a series of water caves that can be visited by boat, and Dingi Cliffs, a huge seafront with stunning views.

The wild coast of Gozo

Gozo, the second biggest island in the country, is famous for the Azure Window, a rock formation in the shape of an arch that connects sea and land. In 2017 the structure collapsed, and since then it has transformed into an exceptional diving site with a large marine diversity. In the film, we highlighted the impressive coastline that charmed us with its crystal lagoons and wild cliffs. We also admired Ggantija- a complex of temples 5500 years old, which are claimed to be the second oldest man-made structure worldwide. However, local legends say that the temples were built by mythical creatures similar to giants. West from them lies Victoria, initially called Rabat, the fortified city on top of a hill which features the same oriental architecture like Valletta. And by the way, the name “Gozo” means joy, a word that accurately describes how we felt during our stay.

Malta is a picturesque and affordable destination not only for tourists, but also for couples that wish to hold their big event in a special place. Among the things that make it so attractive for this purpose are beautiful Mediterranean wedding venues as well as a number of agencies that specialize on organizing destination weddings. Furthermore, though Malta can be crossed in under 45 minutes by car, it features 313 chapels and churches that officiate ceremonies. Last but not least, one of the reasons we want to share through our own experience are the stunning sunsets, like the one we witnessed at Għajn Tuffieħa. Personally, we made very exciting memories from Malta and can’t wait to go back ?

Filming the save the date video in Malta

In our job as videographers, we have many opportunities to travel and to meet as well as collaborate with awesome people and a good example was this save the date video in Malta. Actually, it was one of our most fun projects during our stay in Malta. Such clips are more and more popular, and for good reason: it is an interactive and special way of announcing the big event. In addition, it is a lively memory which you can come back to for years to come and which you can share with your loved ones. Jennifer and Pierre are a couple that loves to travel, and so they don’t miss any occasion to get to know new places and people. Nevertheless, their favourite country remains Malta, the place their birthplace and where they currently live. And since we came to film clips in this magical place, their idea to shoot a save the date video together was a natural and welcome extension to our interests and activities.

Our impressions about the island nation of Malta

Malta, European but exotic, with its historical ports and oriental charm, amazed us from the first moment. But from the airport towards our accommodation we didn’t have the time to enjoy the scenery, as driving the English way on the left side of the street turned out to be quite an adventure. The accommodation, offered to us by some Hungarians we met earlier was an excellent option as we basically staid at people we already knew and became friends with. Together we visited the main attractions of the country and, implicitly, the capital. Valletta, despite being the smallest capital in Europe, it has the biggest concentration of historical moments per hectare, according to UNESCO, so it’s a perfect sport for a save the date video in Malta. Therefore, our single problem was choosing which ones to film ? So this is a short summary of our week before Jennifer and Pierre contacted us.

Filming the save the date video

Some of the filmed sequences were on water, on a picturesque ferryboat ride towards Valletta, from Sliema. There, we filmed on the promenade with views to the St Julian’s Bay, a place that blends the charm of a fishing port with classical hotels, traditional restaurants and an esplanade with palm trees. In fact, these towns, along with remarkable churches and serene beaches turn Malta into an attractive spot for destination weddings. Among the particularities that make it so appealing to future brides and grooms are: financially accessible but beautiful venues with amazing scenery, fresh Mediterranean menus and the greatest number of yearly sunny days in Europe. With regard to Jennifer and Pierre’s wedding, from June 2018, the chosen location is Vila Bighi. Initially an administrative building in neo-classical XIX century style, it now hosts events, featuring panoramic views of the Grand Harbor and splendid terraces. As an interesting closing fact, Malta is in the top of the world’s happiest countries, and we have to admit that during our stay there we totally saw why.

When you think of Malta, you think of serene beaches and narrow historic alleys. Strolling through these, you can feel the warm Mediterranean breeze and sweet food scents. No wonder the island’s name originally came from the Roman word “melita” meaning honey. And Valletta, the capital, is geographically and culturally at a crossroads of cultures, the influences of which can be seen in the UNESCO protected city area. 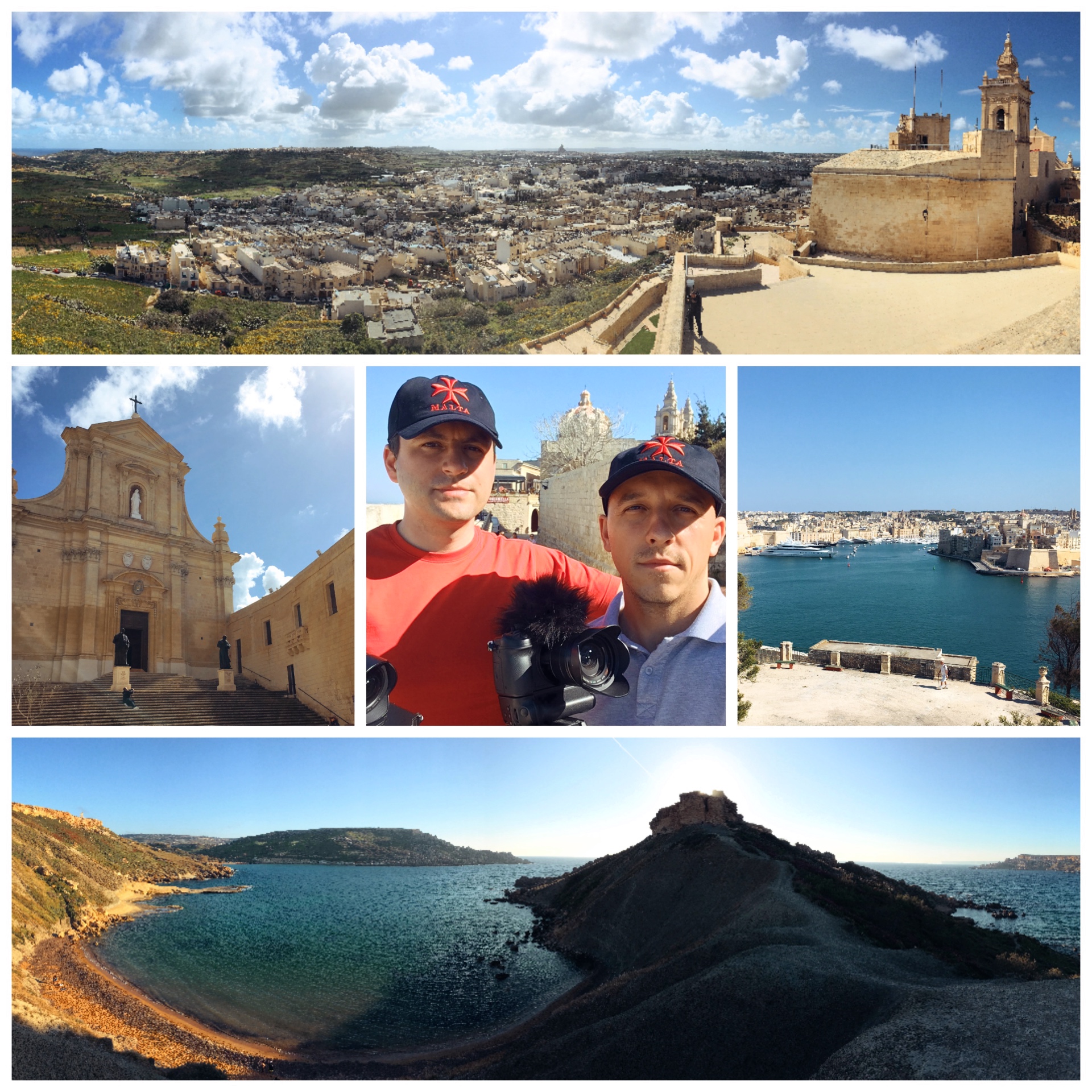 Save the date video in Valletta – behind the scenes

We initially went to Malta to film different projects, but ended up also doing a save the date video for Jennifer and Pierre, a couple we met during out stay and befriended. Jennifer works in the education field, while Pierre is in the gaming/betting industry. The two of them are Maltese and live and work just outside the capital. We got along from the beginning and, since they are about to get married in 2018, had the spontaneous idea of doing a save the date video. Discovering the same passion for travelling, we decided to incorporate this theme in our video. Therefore, they brought some accessories to help set the proper stage.

For the first part of the video shooting, we met with Jennifer and Pierre in St. Julians Bay, a place popular with both tourists and locals. There, in the sunny afternoon, we filmed the first sequences. Afterwards we hurried to catch the ferryboat that connects Sliema from Valletta. When we arrived in the capital, the sun was starting to set, making for a very picturesque filming on the winding city alleys. For the last shooting sequences we went in the Upper Barakka Garden park, a great setting which features white, tall archades and offers panoramic views of the Grand Harbour. A nice coincidence was that from this park, we could see the Villa Binghi restaurant, the location of the future wedding. Regarding the save the date video, it will soon be uploaded on our webpage, so stay tuned!