We love filming weddings that are in serene places, and the beauty of the Parang Mountains, one of the highest mountain ridges in the Southern Carpathians, was hard to rival in the case of this mountain wedding. Andreea and Iustin celebrated their wedding in Petrosani, a city surrounded by a deep green landscape, with lush forests and beautiful churches. The couple has been for many years together until they decided to get married. Thus, they wanted their wedding to be something really special. And indeed it was.

We had our first discussion with Andreea and Iustin via Skype. We still remember how easygoing it all was, and how down-to-earth and nice they were. Fast forward a couple of months and we were on our way to this mountain wedding together with our friends Stefan Fekete and Dumitru Andra. They are a couple based in Cluj and they are amazing wedding photographers. The road to Petrosani was incredibly congested due to heavy traffic, so we were all very relieved when we finally got to the hotel and met the couple for a short briefing.

The ceremony and the shooting on the wedding day

The next day started with the usual preparations around 12. Iustin first saw Andreea at the religious ceremony in the church where the bride according to traditions entered the church together with her father.  The whole event was very elegant but kept simple, which made for a very classy and emotional note. Regarding this romano-catholic ceremony, it was probably one of the best we have ever attended: the priest’s speech was both impressive and funny, and the conveyed ideas had a long-lasting effect. Afterwards, we held a video shooting session with the couple in some nearby locations and then headed for the party.

A wonderful tent to celebrate this mountain wedding

The tent where the celebration took place is located right next to Hotel Rusu and offers an amazing view, especially during sunsets which exactly matched the reception time in our case. Later on the party was very animated, with a lot of dancing. The music consisted of a classical part (played live) and the lively party songs mixed by DJ Cristian Daniel Rusu, a very talented DJ from Cluj. Another highlight was the show made by two artists who juggled with fire and torches and left everyone amazed for a couple of minutes. We remember being in awe at their skills too and thinking about what a beautiful and special wedding night we were filming. 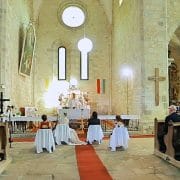 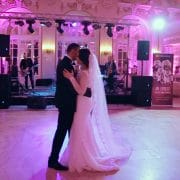 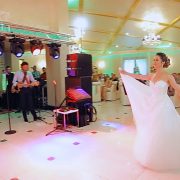