A videography project in Malta

Although we specialize in wedding filming, we do have sometimes the opportunity to make travel films as well. This is how me and my colleague ended up creating a short film about Malta, a small and sunny nation in the Mediterranean that is rich in picturesque views and historic sites. Besides our travel clip, we also had the chance to film a save the date video for a Maltese couple we befriended, just click on the link to read the story. For the technical part, we used 4K equipment that was travel appropriate: DSLR cameras, steadycam, monopied and drones. The journey to the destination was also exciting, as we had a layover in Barcelona, where we took some nice shots as well. Fortunately, we met in Malta the founders of PR Holidays, two young entrepreneurs who offer both accommodation services and mini-tours of the surroundings. With their help we managed to get to know the less touristic areas and enjoy a local’s experience.

The main island and Valletta

Valletta was designated the European Capital of Culture in 2018, and a stroll along its winding alleys most definitely supports the choice. The city is a bridge between East and West, and is charming through its contrasts. Malta has a high living standard, with splendid buildings that reflect British, Sicilian, Turkish and Arab rule. This cultural mix is exactly what makes the country unique: it is a European destination with oriental influences that can be seen in the vibrant colors and exotic flavors. On the main island, besides Valletta, an important attraction is Mdina, the old capital of the region which looks unchanged for centuries. Because history and traditions are important to the nation, every day at noon there is saluting cannon fire from Valletta’s citadel. Outside the city, we enjoyed immensely filming around Blue Grotto, a series of water caves that can be visited by boat, and Dingi Cliffs, a huge seafront with stunning views.

The wild coast of Gozo

Gozo, the second biggest island in the country, is famous for the Azure Window, a rock formation in the shape of an arch that connects sea and land. In 2017 the structure collapsed, and since then it has transformed into an exceptional diving site with a large marine diversity. In the film, we highlighted the impressive coastline that charmed us with its crystal lagoons and wild cliffs. We also admired Ggantija- a complex of temples 5500 years old, which are claimed to be the second oldest man-made structure worldwide. However, local legends say that the temples were built by mythical creatures similar to giants. West from them lies Victoria, initially called Rabat, the fortified city on top of a hill which features the same oriental architecture like Valletta. And by the way, the name “Gozo” means joy, a word that accurately describes how we felt during our stay.

Malta is a picturesque and affordable destination not only for tourists, but also for couples that wish to hold their big event in a special place. Among the things that make it so attractive for this purpose are beautiful Mediterranean wedding venues as well as a number of agencies that specialize on organizing destination weddings. Furthermore, though Malta can be crossed in under 45 minutes by car, it features 313 chapels and churches that officiate ceremonies. Last but not least, one of the reasons we want to share through our own experience are the stunning sunsets, like the one we witnessed at Għajn Tuffieħa. Personally, we made very exciting memories from Malta and can’t wait to go back 😊 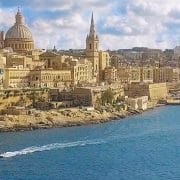 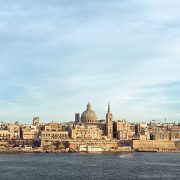 The story of filming a save the date video in Valletta